The Brain Destroying, Cancer Causing Ingredient Hidden In Your Food

There’s a widespread and silent killer that’s hidden in most foods that is slowly destroying millions (maybe even billions) of people’s health. It’s worse for you than alcohol, nicotine and even many drugs.  And it’s likely lurking in your kitchen cabinets right now. What is this harmful substance that is so pervasive and unfortunately legal for food manufacturing companies to use? You’ve probably heard of it, but likely didn’t know how widespread its use was because it is allowed to be disguised under many different names. The ingredient is “monosodium glutamate” or MSG. You will learn here how MSG harms your brain and your health as well as its other “secret” names so you can avoid it and protect your health.

I used to think that MSG was just in Chinese food, but the truth is that it’s actually added to thousands of the foods you and your family regularly eat, especially if you are like most Americans and eat the majority of your food as processed packaged foods or in restaurants.

MSG is one of the most harmful additives on the market and is used in frozen dinners, crackers, canned soups, processed meats, barbeque sauce, salad dressings, and much more. It’s found in your local supermarket and restaurants, in your child’s school cafeteria and, amazingly, even in baby food and infant formula.

Why is MSG so harmful? It’s an excitotoxin — substances, usually containing amino acids that react with specialized receptors (neurons) in the brain in such a way as to lead to the destruction of certain types of brain cells. Humans lack a blood-brain barrier in the hypothalamus, which allows these excitotoxins to enter the brain and cause damage.  Simply put, as described in Dr. Russell Blaylock’s excellent book, Excitotoxins: The Taste That Kills, they are exactly what they sound like: toxins that excite your brain cells to death!

How does this happen?

As Dr. Blaylock explains, “MSG enters the brain past the blood-brain barrier and triggers neurons to open their calcium channel. The glutamate causes the cell to remain stuck in the open position then calcium floods into the cell in large amounts. This triggers the cell to react in emergency mode and starts its special pump that will start pumping out the excess calcium using up large amounts of energy (ATP).

The cell then swells up with excess calcium and eventually the cell is depleted of energy and dies within a few hours. The pump couldn’t pump out the excess calcium fast enough. It’s like trying to bail water out of a boat with a large hole in the bottom. You use up a ton of energy and eventually the boat is filled and sinks. The cell shrivels up and the body’s defense mechanism sweeps away the dead cell debris.”

No strain of rat or mice is naturally obese, so the scientists create them. They make these morbidly obese creatures by injecting them with MSG when they are first born. The MSG triples the amount of insulin the pancreas creates, causing rats to become obese. 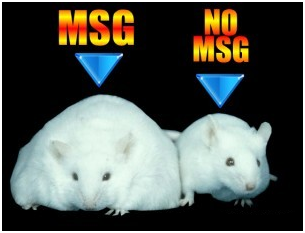 MSG creates a lesion in the hypothalamus that correlates with abnormal development, including obesity, short stature and sexual reproduction problems.  MSG has also been shown to kill brain cells as well as to cause nausea, vomiting, migraine headaches, depression, and heart problems.

As I mentioned earlier, MSG is often disguised under many other names and therefore, you may not be able to detect it in a list of ingredients unless you know what to look for.

According to Dr. Russell Blaylock, MD, the following are hidden MSG derivatives listed on ingredient labels that should be avoided.

Food companies learned that MSG increased the flavor and aroma and enhance acceptability of commercial food products, so it is doubtful that they will ever quit using this brain killing additive to our food supply.  Take a quick trip to your kitchen and check your pantry and fridge. You will likely see that MSG is in almost everything processed: soups, chips, ramen noodles, gravy, sauces, salad dressings, corn oil, broth and so many other items.

If you want to avoid MSG, learn to read ingredient labels and better yet, eat foods that are whole foods – foods from nature that are unprocessed. Your health and your family’s are worth the extra effort!

Visit “The Keys to Cancer” for information on reversing cancer naturally